In the lesson we will learn about the diagrams for connecting seven-segment LED displays to microcontrollers, about how to control them.

LED seven-segment indicators remain one of the most popular elements for displaying digital information.

The following qualities contribute to this. 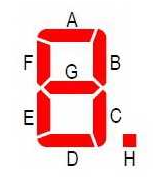 The segments are denoted by Latin letters from ”A” to ”H”.
The anodes or cathodes of each LED are combined in the display and form a common wire. Therefore, there are common anode and common cathode displays. 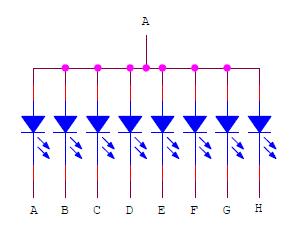 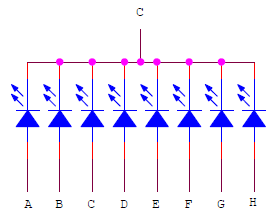 It is necessary to connect LED displays to the microcontroller through current-limiting resistors. 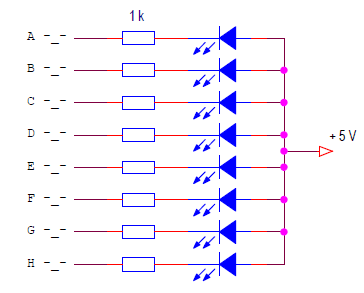 The calculation of the resistors is the same as for individual LEDs.

Modern LED indicators glow quite brightly already at a current of 1 mA. For a circuit with a common anode, the segments will light up, on the control outputs of which the microcontroller will form a low level.

In the connection circuit of a common cathode display, the polarity of the power supply and control signals changes. 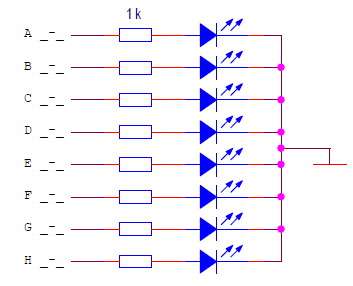 The segment will be illuminated, on the control output of which a high level will be formed (5 V).

To connect each seven-segment indicator to the microcontroller, eight pins are required. If you need to connect 3 - 4 displays (digits), then the task becomes practically impossible. Just not enough pins of the microcontroller. In this case, the indicators can be connected in multiplexed mode, in the dynamic display mode.

It is necessary to connect the same segments of each display digit. It turns out a matrix of LEDs connected between the pins of the segments and the common pins of the indicators.

Here is a multiplexed control circuit for a three-digit common anode display. 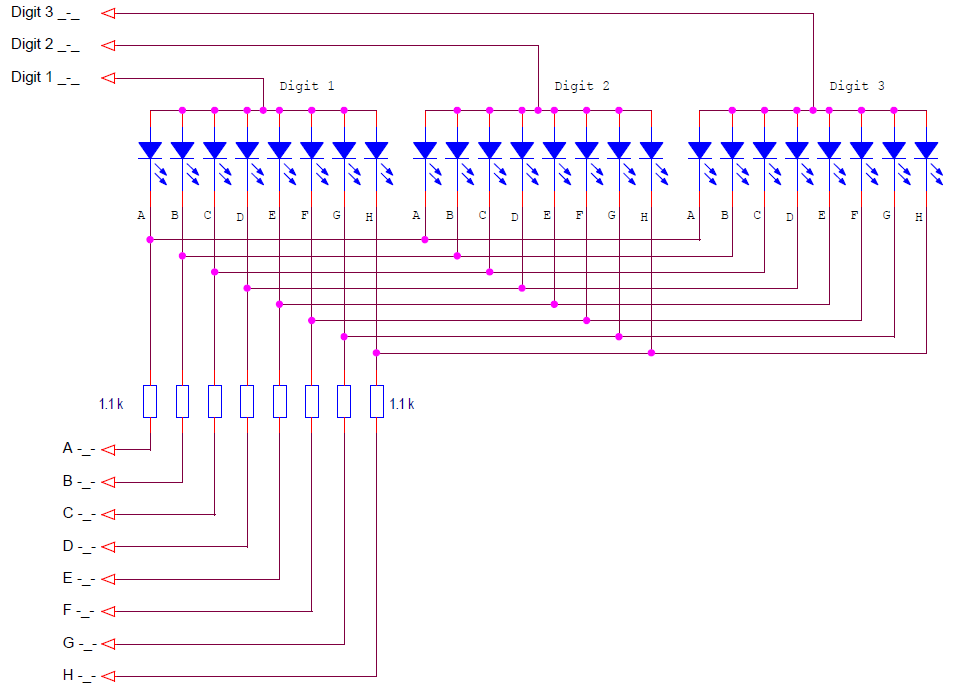 To connect the three digits display to the controller, it took 11 pins, not 24, as in the static control mode.

With dynamic display, only one digit is lit at a time. A high level signal (5 V) is sent to the common pin of one of the digits, and low level signals are sent to the segment pins for those segments that should be lit in this digit. After a certain time, the next digit comes on. A high level is formed on its common pin, and state signals for this digit are sent to the segment pins. And so for all digits in an infinite loop. The cycle time is called the display regeneration time. If the regeneration time is short enough, then the human eye will not notice the switching of digits. It will seem that all digits are lit constantly. To eliminate flickering of display digits, it is considered that the frequency of the regeneration cycle should be at least 70 Hz. I try to use at least 100 Hz.

A dynamic indication circuit for a common cathode LED display looks like this. 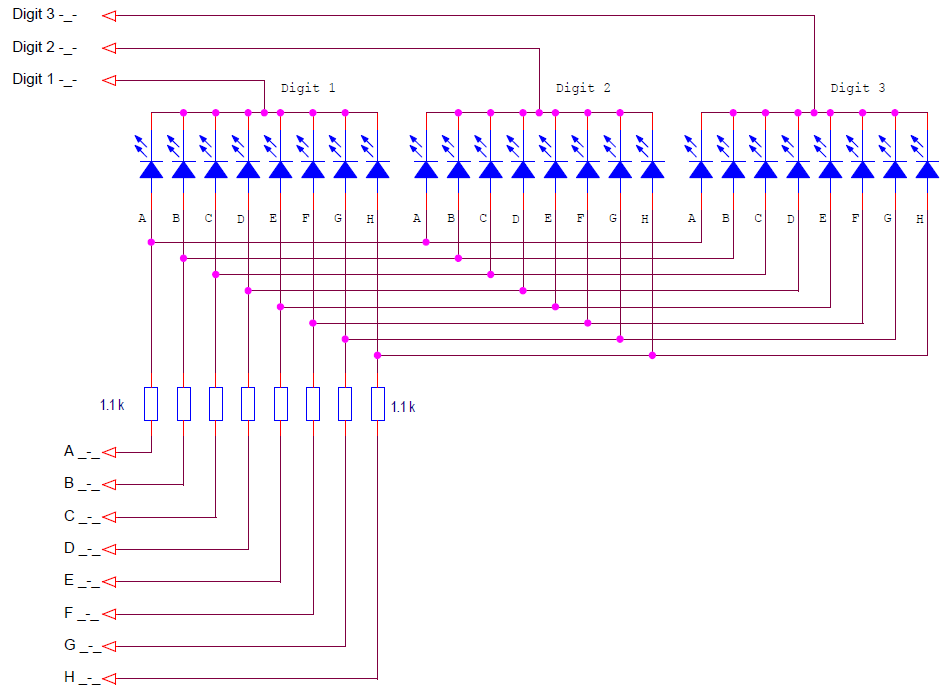 Calculate the resistance of the current limiting resistors.

With such values of the currents, the display can be connected directly to the Arduino board pins, without using additional switches. For bright displays, such currents are enough.

If the displays require more current, then additional switches must be used, especially for the common signals of digits. The total current of a digit is 8 times the current of one segment.
Here is a multiplexed control circuit for a common anode LED display with transistor switches of digits selecting. 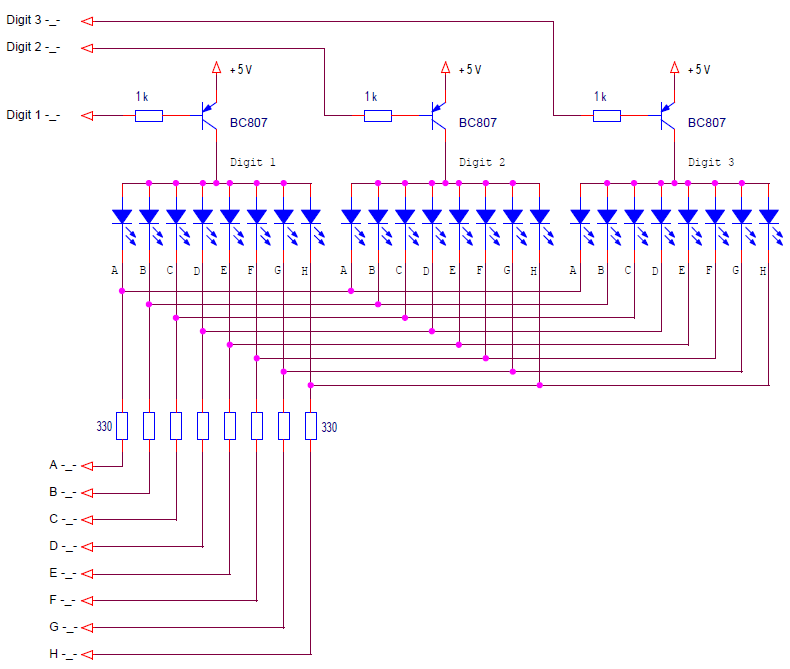 To select a digit in this circuit it is necessary to form a low level signal. The corresponding switch will open and energize the digit pin.

A multiplexed control circuit for a common cathode LED display with transistor switches of digits selecting. 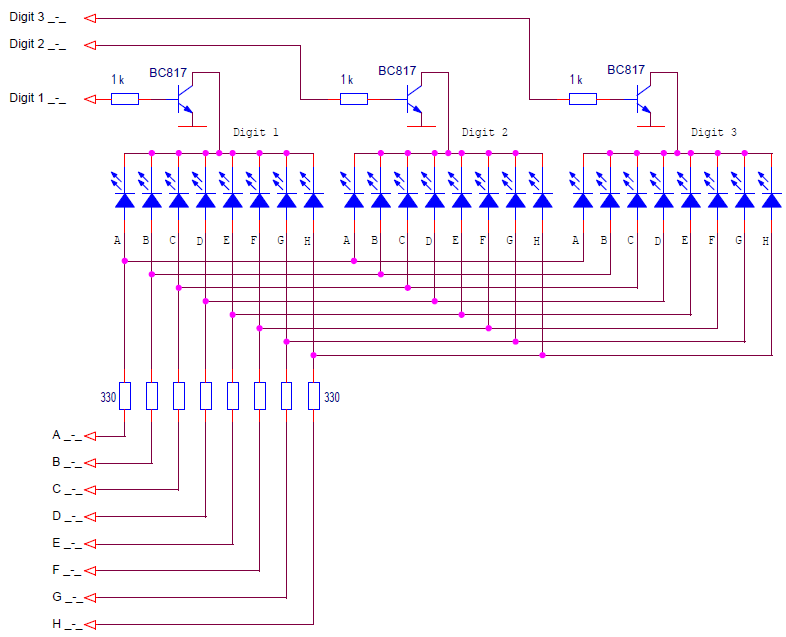 To select a digit in this circuit, it is necessary to form a high level signal. The corresponding switch will open and close the common pin of the digit to the ground.

There may be circuits in which it is necessary to use transistor switches for both segment pins and common digit pins. Such schemes are easily synthesized from the previous two. All shown circuits are used when powering the display with voltage equal to the power supply of the microcontroller.

There are indicators of large sizes, in which each segment consists of several LEDs connected in series. To power such indicators, a source with a voltage greater than 5 V is required. The switches must provide overvoltage switching with control from the signals of the microcontroller levels (usually 5 V).

The scheme of the swithes closing the indicator signals to the earth remains unchanged. And the power switches should be based on a different scheme, for example, such. 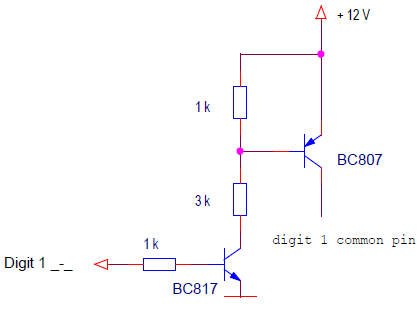 In this scheme, the active digit is selected by a high level of the control signal.

Between switching the digits of the display for a short time (1-5 μs) all segments should be turned off. This time is needed to complete the switching transients.

Structurally, the pins of the digits can be combined in one case of a multi-digit display, and a multi-digit display can be assembled from individual single-digit ones. Moreover, you can collect a display from individual LEDs, combined into segments. This is usually done when it is necessary to assemble a very large indicator. All the above schemes will be valid for such options.

In the next lesson, we'll connect a seven-segment LED display to the Arduino board, develop a library for controlling it.