We learn about another way of processing the button's signal to filter out noise and eliminate contacts bounce.

In lesson 6, we considered one of the ways to eliminate the bounce of button's contacts and wrote a program for its implementation.
Let's call this method the expectation of a stable state of contacts. Let me remind you of its algorithm. The decision about the state of the button contacts is accepted after the signal state has become stable (stopped changing) for the specified time. A very reliable method for eliminating the bounce of contacts.

But in addition to the bounce of contacts in the signal there are also electromagnetic interference. We said that together with the bounce, the method of waiting for a stable state of contacts eliminates interference. Let's see how this method will handle a signal with regular impulse noise.

The first diagram is the signal of the button's contacts with bounce and impulse noise. The second diagram is the counter code that counts the time of a steady state of the signal. It can be seen that short interference pulses reset the counter. Hence, its value never reaches the switching threshold, and the sign of the button pressing will not be formed. Those. the stable state waiting algorithm will never allocate the switching of contacts in such a signal, although it is clearly visible that in the middle of the diagram the contacts closed.

But this situation is quite real.

A typical example is security alarm.

A remote control with buttons is located a few meters away from the controller.

At a distance of several tens or even hundreds of meters, a number of security sensors of various types are connected to the controller. It can be contact sensors, reed sensors, intelligent sensors with relay or optoisolated output, fire sensors. Imagine what opportunities for the effects of interference! Without digital signal filtering, such systems will not work.

In all these cases, digital signal filtering should be used, which significantly improves immunity to electromagnetic interference.

There are very complicated algorithms for digital signal processing. In our case, a simple averaging of the signal level is sufficient. According to the diagram shown above, we easily determine the signal state. We simply see that in the first half of the chart the average level is clearly high, and in the second half - low. And short interference does not prevent us from visually determining the signal state.

The averaging algorithm is quite simple and looks like this. We need a average value counter and a constant AVERAGE_TIME - the averaging time. 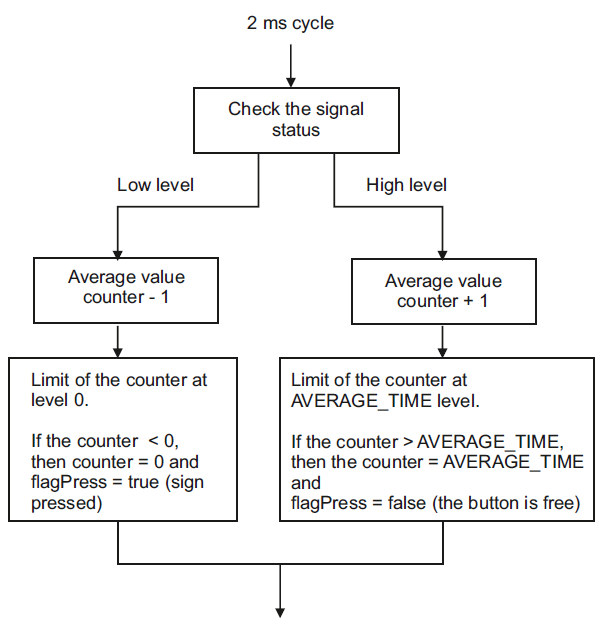 Here are diagrams showing the operation of the signal averaging algorithm. 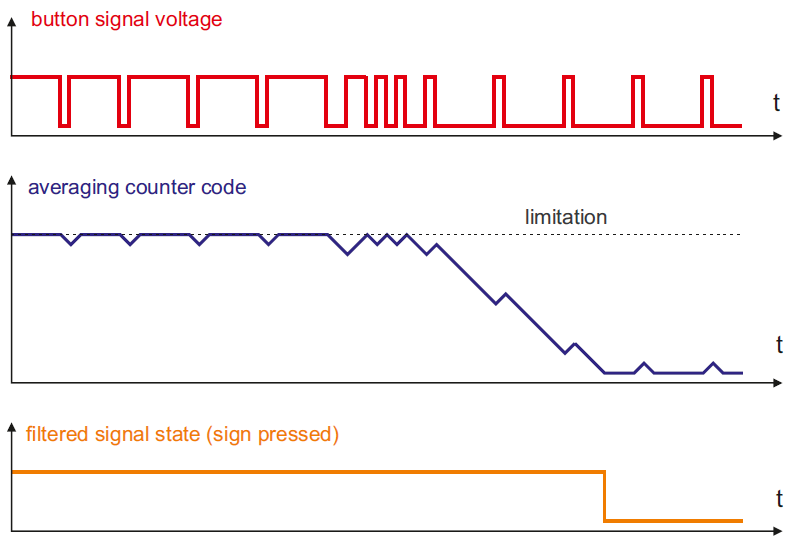 Such an algorithm will easily determine the state of contacts even with regular interference. The main thing is that the average level of interference is less than the average signal level.
It must be remembered that digital filtering by this method introduces a temporary delay in determining the signal state. Those. It can be used only for sufficiently slow signals - with a response of tens of ms. All components with mechanical contacts do not switch faster.

Implementation of the algorithm for digital signal filtering in Arduino program.

I suggest not creating a separate class, but adding a method for the Button class created in the previous lesson. As I have already said, a button means any electronic element that requires the software to process its signal. So let's do digital filtering in the same class, realizing that this class can be used not only for a button.

We believe that only one of the two signal processing methods can be used in the class:

In this case, we do not need to create new variables. We can use the same signs, the same variables. Restriction - you can call only one of the methods for each object. From the point of view of object-oriented programming, this is not very good, but we remember that the resources of our controller are limited. Such universality will not create problems for us.

Let's add the filterAvarage() method in the Button class description.

Let's write the code for the new method.

Here is the complete code of the program. (sketch_8_1)

Download the program to the controller. Check. You will see that the corresponding LEDs react to both buttons in exactly the same way. Simply, you are not able to simulate the signals of different duty cycles with a period of 30 ms.

Now you can check that when you press the buttons, both LEDs light up with a delay of about 5 seconds. Again, the buttons work the same way.

But if you keep both buttons pressed for 3 seconds and free for one second in cycle, you will see that the second LED remains off. And the first LED with a long delay, but will light up.

We have finished creating the Button class. The button was not such a simple element. In the next lesson, we'll design this class as a library.