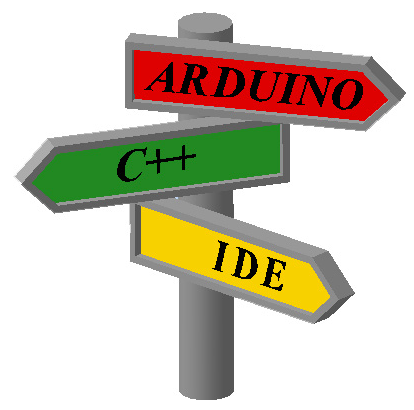 In the lesson we learn what pointers are, and how they allow us to optimize the program code, learn how to convert complex data types (int, long, float ...) into a sequence of bytes.

In principle, you can develop programs without using pointers. But they significantly speed up the execution of the program code, which is especially important when working with microcontrollers. Below will be shown how effective the use of pointers to convert complex data types into bytes.

The topic of pointers in C ++ is important and extensive. Now I will very briefly talk about pointers. Details of their use will be discussed in the following lessons as needed.

Pointers in C++ for Arduino.

When developing a program, we work with variables of different types, arrays, objects, functions ...

And to access a variable by address (pointer) there is an indirect addressing operation *. It reads the value of the memory cell at the address referenced by the pointer.

It should be understood that & cd is a number, a specific address. And ptrCd is a pointer type variable, i.e. address variable.

Like any other variable, the pointer must be declared before use. When declaring a pointer, the symbol * is placed before its name.

To distinguish pointers from ordinary variables, it is customary to add ptr characters to the name. But this condition is optional and many do not adhere to it.

When declaring pointers, the required number of bytes of memory is allocated, depending on the type of data. For example, for dt (int) the compiler will allocate 2 bytes, and for x (float) 4 bytes will be reserved.

Using pointers is very efficient when working with arrays. The array name is already a hidden form of applying pointers.

The array name is a pointer to its first element.

It is convenient to use pointers to arrays, i.e. array names as function arguments.

Like an array name, the function name itself is a pointer. A pointer to a function stores the memory address of the program where its code is located. At this address, control is transferred when the function is called. Such pointers are used:

In lesson 10, we used the MsTimer2 :: set() function. As the second argument, we set the name of another function (timerInterrupt) - the interrupt handler.

Compared with the function declaration, brackets and * were added.

Pointers to void are used to refer to an object whose type is not defined. For example, to store different types of data in the same memory cells.

Before using a pointer to void to store a specific data type, you must perform an explicit conversion to this type.

Memory is allocated for type long (4 bytes). The start address is written to dt.

Memory is allocated for 50 int values (100 bytes). The start address is written to pointer weights , which can be used as an array name.

When declaring, you can initialize the value at the pointer address:

You can free up the memory allocated by the new operator using the delete operator.

Note that to free the memory of arrays, use the operator delete []. If you forget about parentheses, only the first element of the array will be deleted, and the rest will be inaccessible.

The operator new is also used to create dynamic objects.

When creating a static object, access to its properties and methods is done by the direct conversion operation - ".".

To work with a dynamic object through a pointer, to access its properties and methods, use the operator of indirect conversion ”->”.

You can perform simple operations with pointers:

The access operation allows access to the value whose address is stored in the index. The construction * pointer_name can be considered a variable name. It allows all actions that are allowed for the type specified when the pointer is declared.

Arithmetic operations with pointers automatically take into account the size of the type of variable. Those for the char data type, the increment of the pointer will increase the memory address by 1 byte, and for the long type, adding 1 to the pointer will add 4 bytes to the real memory address. Arithmetic operations are mainly used when working with data placed in memory sequentially, for example, with arrays.

In the last lesson, we saved the data in the Arduino's EEPROM. We kept the data type byte. EEPROM stores data in bytes and our data in bytes. It's simple. But, for exampe, we need to save a variable of type int in the EEPROM. It takes 2 bytes in memory and must be converted to individual bytes in order to write to non-volatile memory. You can do this:

We received two bytes, but had to perform several operations, including a shift of 8 bits. To handle a variable of type long shifts and other operations will be much more. But I don’t have any idea what to do with a float variable. Convert it to a fixed-point number? Probably, something can be thought up, but it will be a difficult decision and will require significant resources from the microcontroller. But all variables are stored in memory, divided into bytes. We must take them from memory in the form of bytes. You can do this with a pointer.

Let's convert an int variable to bytes in this way.

In this example, we did not declare a pointer at all. In the lines of code for reading bytes, the operation of receiving and translating the address was repeated. To convert data with large sizes, it is better to declare a pointer. This will greatly speed up the program.

An example of converting a float variable into bytes:

It remains to write bytes to the EEPROM. Of course, this can be done without intermediate variables.

To read data of type float from EEPROM, we read the bytes and write them sequentially to the memory area by the pointer ptrdt:

Converting variables of different types into bytes is required in many other cases with byte streams, for example, when communicating on a serial port.

Pointers are a very important topic for practical programming of microcontrollers. In future lessons, as necessary, we will consider ways to use them with concrete examples. Then you may have to return to this lesson.

In the next lesson we will talk about the reliability of programs for Arduino, learn how to use the watchdog timer.

4 thoughts on “Lesson 15. Pointers in C++ for Arduino. Conversion of different data types to bytes.”