The lesson describes the Arduino board UART serial interface, the library for working with it, and the use of the UART port for debugging programs.

The Arduino IDE does not have a debugger, which creates certain problems in finding program code errors.

There are always mistakes when developing programs. Formal errors are detected during compilation. Finding algorithmic and computational errors is much more difficult.

The Internet describes many ways to debug programs that use additional libraries, programs, hardware adapters. But the main function of debugging is to see the state of the program, to know the value of variables. This can be done by transmitting the necessary information to the computer via a serial interface. Physical connection of the Arduino board to a computer via a USB cable always exists. The Arduino IDE has a serial port monitor that allows you to receive and send exchange data with the board. You can transfer to the computer any information about the state of the program and display it on the monitor. This way of debugging suits me perfectly. Only instead of the Arduino IDE monitor, I sometimes use my programs that display data in a convenient form.

Of course, the UART interface in Arduino can be used to communicate with other controllers or peripheral devices, but so far we are interested in it from the point of view of communication with a computer.

The UART is a Universal Asynchronous Receiver-Transmitter. UART data is transmitted by a serial code in the following format.

I describe the most common format. There are variants with a different number of data bits, synchronization bits, a parity bit, etc. But these formats are rarely used. The main thing to remember:

Information is exchanged via UART in duplex mode, i.e. data transmission can occur simultaneously with recieving. For this, there are two signals in the UART interface:

Any Arduino board has at least one hardware UART serial interface. The Arduino Mega and Arduino Due boards each have three ports.

When I use the expression hardware interface, I emphasize that there is an electronic node in the controller, into the register of which the program only loads bytes for transmission, and the formation of exchange signals and all other operations is done by this node. Software data transfer via the UART protocol can also be implemented. In this case, all signals are generated by the program. Of course, it takes CPU resources.

Arduino UNO board has one UART port, the signals of which are connected to pins 0 (RX signal) and 1 (TX signal). The signals have logical TTL levels (0 ... 5 V). Through these pins (0 and 1), you can connect another device with a UART interface to the board.

In addition to the function of communicating with other controllers, the UART port of the Arduino UNO board is used to download a program to the controller from a computer. To do this, the corresponding signals of the ATmega16U2 chip - a USB / UART interface converter are connected to the same signals (RX and TX). The converter IC is connected through 1 kΩ resistors.

Fragment of the Arduino UNO R3 board layout.

The ATmega16U2 interface converter allows you to connect the Arduino board to a computer via a USB port. The driver must be installed on the computer. It creates a virtual COM port on the computer. Through it the exchange takes place.

It is important to understand, despite the fact that the board is connected to the computer via the USB port, all programs exchange data through the virtual COM port, unaware that the port is virtual.

To work with hardware UART controllers in Arduino, there is a built-in class Serial. It is designed to control the exchange of data through the UART. Before I talk about the functions of the Serial class, I want to explain the difference in the format of the exchange data.

Through the serial interface, data is always transmitted in binary code. The question is how to interpret this data, how to perceive it. For example, the binary code “01000001” (decimal 65) is transmitted. How to display it on the screen? The number 65 can be transmitted and ”65” should be displayed on the screen. Or maybe it is the code of the letter "A", then on the screen you need to write "A". Just need to know in what format the data is transmitted.

In the Serial class, data can be transmitted in two formats:

For example, the serial port monitor in the Arduino IDE program accepts data as ASCII text. In order for it to display the number “65” on the computer screen, it is necessary to transmit the character codes “6” and “5”. And the code “65” will be displayed by the monitor as symbol “A”.

The main functions of the Serial class.

The function enables the operation of the UART port and sets the baud rate (bits per second). To set the data transfer rate, it is recommended to use the standard values (table in the “Serial UART” section).

The method disables the UART port, frees the RX and TX pins.

The method returns the number of bytes received by the serial port and written to the buffer. Serial port buffer can store up to 64 bytes. In the case of an empty buffer, returns 0.

Returns the next byte from the serial buffer. If the buffer is empty, returns the number - 1 (0xffff).

Waits for the end of data transfer from the serial port buffer.

Serial.flush (); // waiting for the end of the transfer

Outputs data via the serial port UART in the form of ASCII characters. The function has various call forms for different formats and data types.

Outputs data through the UART serial port in the form of ASCII characters with the addition of newline characters (\ r, code 13) and (\ n, code 10). The following message will be displayed on the new line. The rest is similar to the print() function.

Returns the next byte from the serial buffer without deleting it from the buffer. If the buffer is empty, then returns -1. The function returns the same value as the read() function.

Reads bytes arriving in the serial port and writes them to the buffer. Stops after receiving a specified number of bytes or in the case of a timeout. Returns the number of bytes received. The timeout is set by the setTimeout() function.

Sets the timeout time for the readBytes() function. The time is specified in ms, by default it is 1000 ms.

The Serial class is a built-in class. For him, do not need to search for the library and include it. In order to use the UART, it is enough in setup() to enable the port and set the rate:

Now you can transfer data using the print() or write() function.

Serial.println("Message to monitor");  // message to the serial monitor

If several bytes are output through the port, the Serial class writes them to the program buffer and sequentially transfers the data to the UART controller as it is transmitted.

Here is a program that displays a message and a pass number to the serial monitor every second. 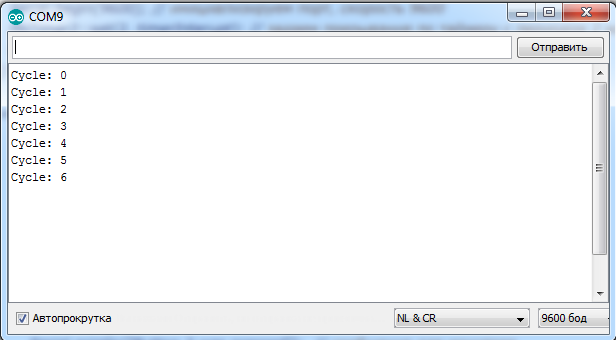 When data arrives at the UART input, the Serial class writes them to the software buffer. To read the data from the buffer, you must first check whether they are there.

Here is a program that reads a byte from the serial port and sends it to the port. Those. Everything we enter in the serial monitor should appear in the monitor window for the received data. 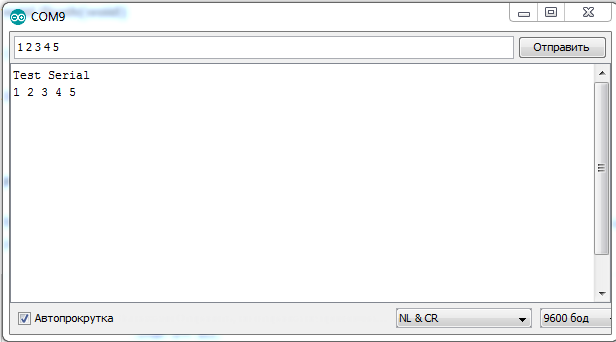 Debugging programs using the serial port of the Arduino.

The principle of debugging is simple.

For example, we check the operation of buttons and functions of processing signals of buttons. In the program block, which is performed by pressing the buttons, we insert the command to send the message to the computer.

For the buttons connected according to the scheme of the previous lesson, the sketch of the program looks like this.

To see these messages, you must start the port monitor: Tools -> Serial Monitor. Now you can click on the buttons and see the reaction in the monitor window. 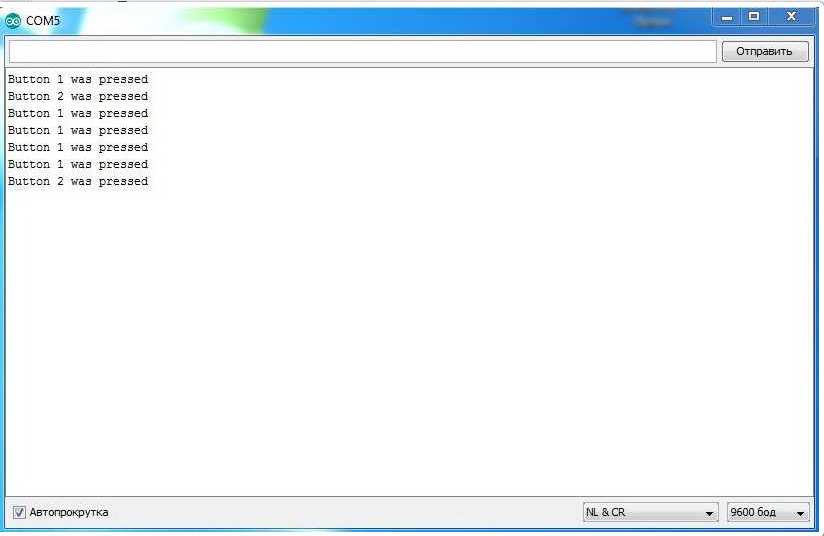 It is only necessary that the exchange rates be the same in the program and the monitor (I have 9600 baud).

You can also transfer variable values, calculation results, modes, etc. In subsequent lessons in almost every program, we will use a serial port to monitor the status of the program.

In the next lesson we will learn to read the values of signals on the analog inputs of the Arduino board.